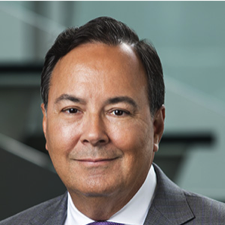 As Vice Chairman, Edward Knight manages global government relations and serves as a senior advisor on public policy and litigation. During his tenure as Nasdaq’s General Counsel from 2001 to 2019, Ed championed many causes for investors and public companies: proxy reform; corporate governance modernization, including the JOBS ACT passage in 2012; regulatory reform; immigration reform; and enhancing the self-regulatory organization model. He has worked tirelessly to ensure Nasdaq’s U.S. equity market maintains its position as the premier global marketplace for capital formation.

Ed currently serves as a Trustee of the University of Texas Law School Foundation, a member of the Advisory Board of Columbia University’s School of International and Public Affairs, and a member of the District of Columbia, Texas and Supreme Court Bars. He is a life member of the Council on Foreign Relations and sits on its Committee on Corporate Affairs. Ed is Vice Chairman of the Board of the U.S. Chamber of Commerce and Vice Chairman of the U.S. Chamber’s U.S.-India Business Council, and also sits on TechNet's Executive Council. He is a member of the Nasdaq Dubai Board and the Board of the World Federation of Exchanges. He is based in Nasdaq’s Washington, D.C., office.

Prior, he was a partner with the law firm of Akin, Gump, Strauss, Hauer and Feld in Washington, D.C. A Texas native, Ed received his Bachelor of Arts, with honors, in Latin American Studies from the University of Texas at Austin and his Juris Doctorate from theUniversity of Texas School of Law.