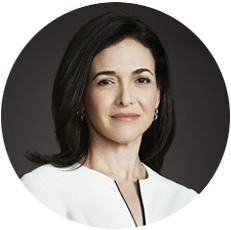 Sheryl Sandberg is chief operating officer at Meta, previously Facebook,
overseeing the firm's business operations.  Prior to Meta and Facebook, Sheryl was vice president
of Global Online Sales and Operations at Google, chief of staff for the United
States Treasury Department under President Clinton, a management consultant
with McKinsey & Company, and an economist with the World Bank.

Sheryl is the co-author of Option B: Facing Adversity,
Building Resilience, and Finding Joy with Wharton professor and bestselling
author Adam Grant, which will be released April 24, 2017.  She is also the author of the bestsellers Lean
In: Women, Work, and the Will to Lead and Lean In for Graduates.  She is the founder of the Sheryl Sandberg
& Dave Goldberg Family Foundation, a nonprofit organization that works to
build a more equal and resilient world through two key initiatives, LeanIn.Org
and OptionB.Org (launching April 2017).  Sheryl
serves on the boards of Facebook, the Walt Disney Company, Women for Women
International, ONE, and SurveyMonkey.

Sheryl lives in Menlo Park, California, with her son and
daughter.